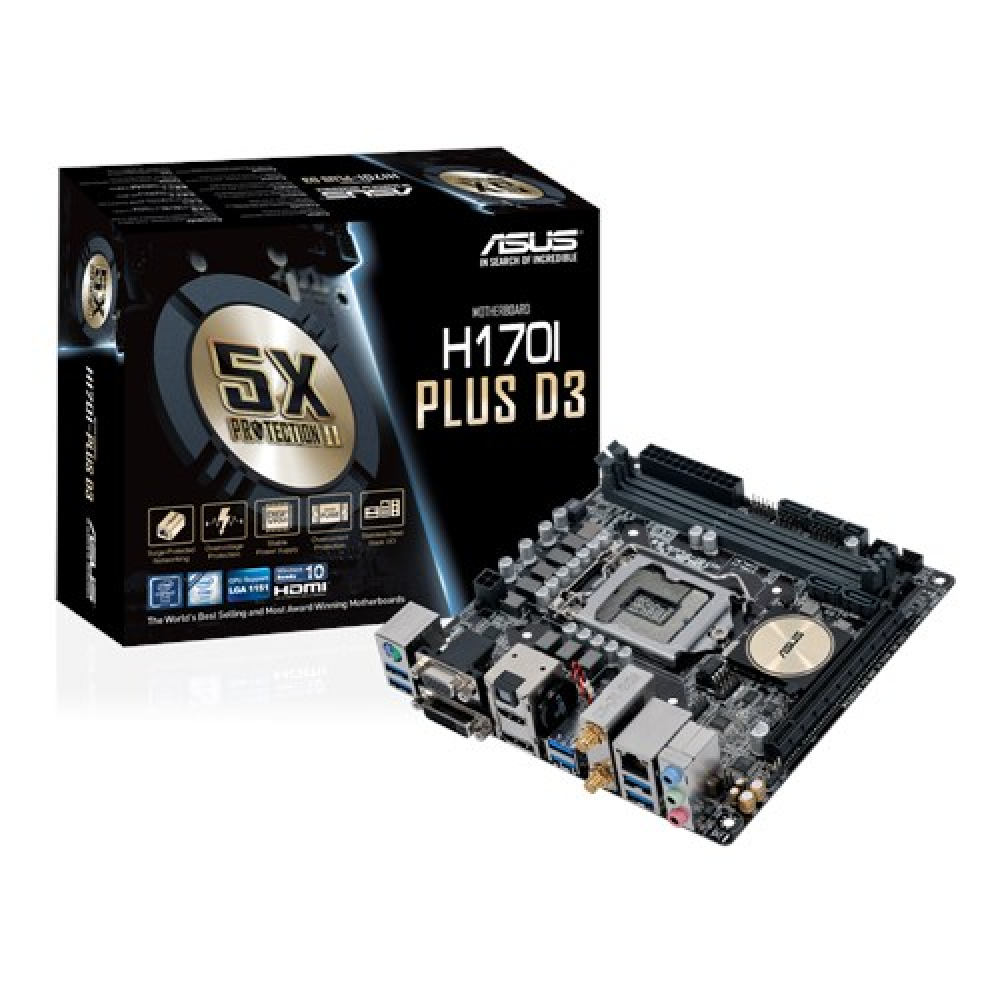 The H170I-Plus D3 LGA1151 Mini-ITX Motherboard from ASUS comes with an LGA1151 socket and an Intel H170 chipset so you can build a compact system running on an Intel 6th-generation processor. This chipset supports the motherboard's M.2 slot as well as the four SATA 6 Gb/s and six USB 3.0 ports. For rendering advanced 3D textures, this motherboard comes with a PCIe 3.0 x16 slot for dedicated graphics cards. Visuals can also be handled by the integrated Intel graphics chipset coming from the processor through the DVI-D, VGA, DisplayPort, and HMDI ports. Moreover, the two DIMM slots can hold up to 32GB of DDR3 memory modules.

This motherboard is built with a Realtek ALC887 audio processor that surrounds you in 8-channel sounds via the four audio jacks. For accessing the Internet, ASUS has equipped this motherboard with an Intel I219V Gigabit controller as well as 802.11ac Wi-Fi. Another built-in wireless technology is Bluetooth 4.0. There are also one SATA-Express port and one PS/2 combo port.

The H170 chipset is designed to support Intel's 6th-generation of Skylake processors. It provides improved performance by utilizing serial point-to-point links, allowing increased bandwidth and stability. It natively supports up to eight USB 3.0 and six SATA III ports as well as PCIe 3.0 and M.2 technologies for faster data retrieval. This chipset also comes with iGPU functions so you can enjoy integrated graphics performance.

Precise and stable power is delivered to the processor with the help of a DIGI+ VRM chipset, which intelligently determines the amount based on real-time demands, reducing energy waste and improving system stability. Network connectivity is protected against static electricity and surges with the help of LANGuard. ESD Guards are used to deploy an active protective circuit design that prevents electrostatic interference and damage for the motherboard's ports and jacks. In addition, ASUS has built this motherboard with resettable fuses as well as a stainless-steel I/O panel.

The UEFI BIOS features a mouse-controlled graphical interface so you can easily overclock and monitor the internal components. It comes with EZ and Advanced modes that offer settings based upon your expertise. Within these settings, you may update the BIOS, control the speed of the fans, and monitor the internal temperature as well as the drive's status.