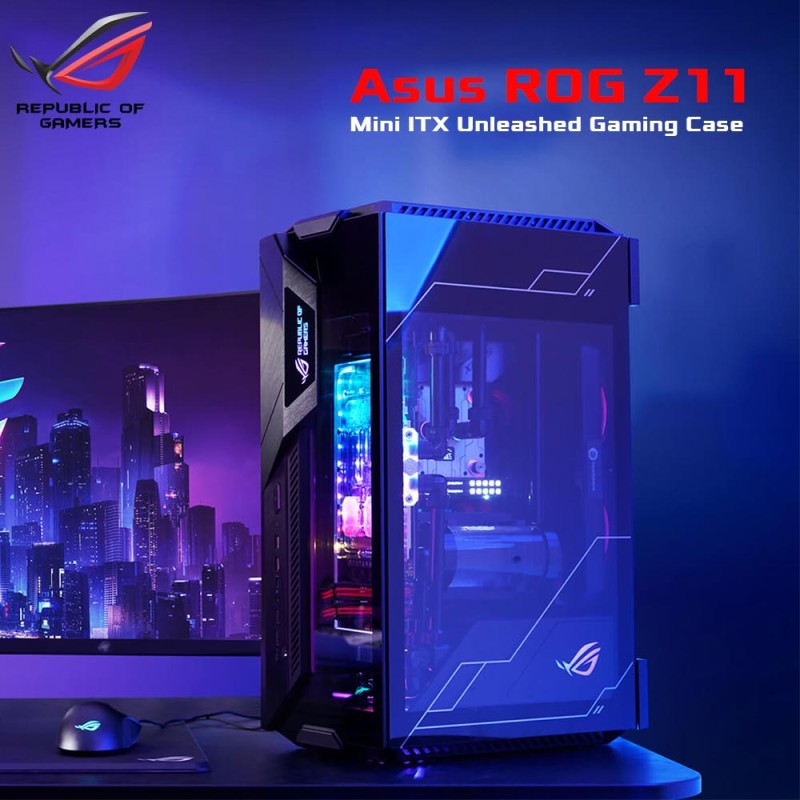 A sleek and modern-looking case that rises above the competition by enabling users to showcase compact designs without compromising. Each feature is carefully designed with the user in mind to maximize utility, flexibility, and connectivity. The patented 11° tilt design provides improved airflow and heat dissipation to create an innovative solution that maximizes thermal performance with demanding hardware - such as an ATX power supply or 3-slot cable-less graphics card. For water-cooling fans, the Z11 offers ample space and the option of a dedicated liquid-cooling ring. To add elegance to the essence, the interior build components are beautifully lit by Aura Sync lighting that can be seen through the 4mm front and right side gray glass panels.

Improved airflow and superior thermal performance are critical in high-power systems with compact form factors, and the ROG Z11 delivers this with a patented interior design that tilts the motherboard tray at an 11-degree angle, providing an additional 40mm of space in the rear. from the motherboard. This extra space improves heat dissipation around the CPU and graphics card, as well as the M.2 SSD that can be installed on the back of the motherboard. The design also allows for compatibility with a 3-slot graphics card without a jack-up and creates a stunning visual display of components.

ROG Z11 is engineered to improve cooling performance. The entire design results in efficient thermal discharge from the enclosure via the chimney effect and negative air pressure, which is generated by fans that expel hot air at a faster rate than the intake. With a choice of up to five 120mm fans, or three 140mm fans plus two 120mm fans, users can maximize airflow and have flexibility in customization.

An 11-degree tilt of the motherboard tray provides a maximum of 40mm of additional space for easy cable management.

An integrated extension hub enables builders to connect up to six PWM fans and three addressable RGB fans or LED strips and provides an additional USB 2.0 port for easier assembly. Plenty of I/O ports and an ARGB light control button on the front panel make connecting components and devices easy.

ROG Z11 can be placed in either portrait or landscape mode, allowing users to make any design of their own. On top of providing the flexibility to orient the case according to workspace availability and preferences, the Z11 also enables users to choose the optimal orientation of components in their build. Regular and angled power cords are also included in the accessory box to conveniently complement each position.

The RGB LEDs integrated into the front and side panels can be customized using a dedicated control button or using Aura Sync lighting software. These features allow ROG Z11 to flash in millions of colors and a range of effects, which can be synchronized with a vast ecosystem of Aura Sync-compatible components for the ultimate personalization.

ROG Z11 offers an expanded liquid-cooling setup. The enclosure reserves space for a water-cooling pump and a reservoir above the power supply cover, providing mini-ITX/DTX enthusiasts the flexibility to customize their liquid cooling loop solution.

Two ROG motherboards are included to complement the built-in Aura Sync lighting - one nameplate for portrait and one for landscape. Additional source files (AI and JPG) are available for download, allowing full customization of the nameplate.