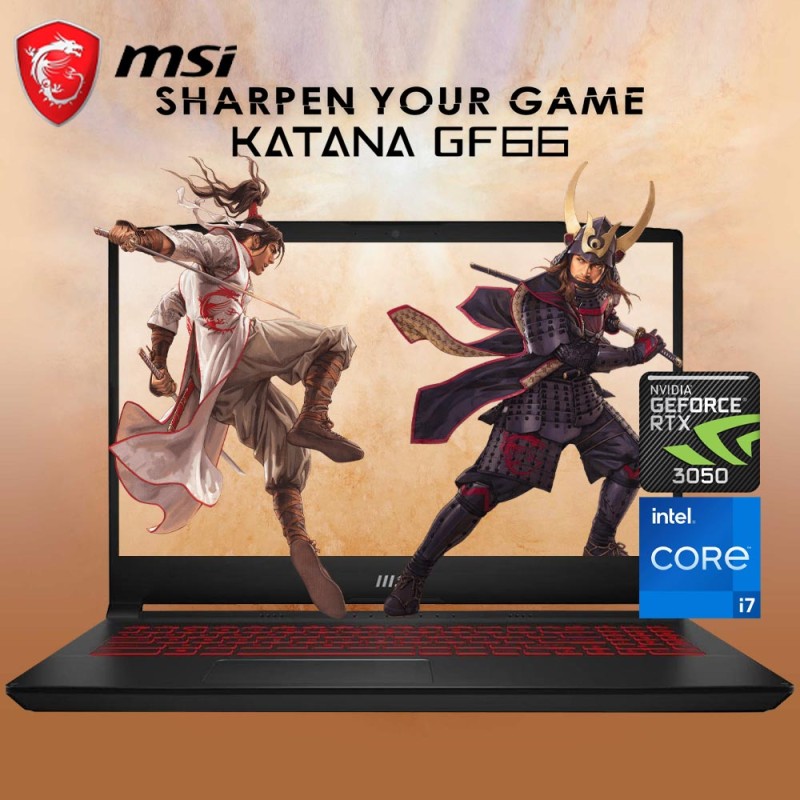 Click here for more of MSI
Sold by SpiderNet Technology

The Katana GF series is as important and sturdy as a sword and optimized to unlock true interpretation during gameplay. Katana GF66 runs at optimum interpretation with an exclusive red construction keyboard so that you can shine on the battleground.
Nagano Tsuyoshi
PROFESSIONAL ILLUSTRATOR OF GAMING CHARACTERS
Nagano Tsuyoshi artist gesture
Nagano Tsuyoshi, the generator of the most emotional and well-honored game cover" love of the Three fiefdoms V ” from the 1990s, has done it again. Together, MSI and Nagano Tsuyoshi, bring a sophisticated spirit to the valorization of the Katana GF series. With a collective unreality for gaming, this collaboration has created a masterpiece for gamers.
REINVENTINGMULTI-CORE Armature
Katana GF66 equips the rearmost 12thGen. Intel ® Core ™ i7 processor, features interpretation and effectiveness bones, furnishing an unknown boost in multitasking workshops and heavy games.
GEFORCE RTX 30 SERIES LAPTOPS
THE ULTIMATE PLAY
NVIDIA ® GeForce RTX ™ 30 Series Laptop GPUs authority the world’s fastest laptops for gamers and generators. They’re erected with Ampere — NVIDIA’s 2nd word RTX armature — to give you the most pragmatic shaft-traced plates and slice-bite AI features like NVIDIA DLSS. Plus, Max- Q Technologies unlock the authority of AI to make slim, high- interpretation laptops that are brisk and more than ever.
BOOST interpretation WITH AI
NVIDIA DLSS gives games a celerity boost with uncompromised image quality. Coil up the settings and conclusion for an indeed better visual experience.
further IMMERSIVE gests
Ray Tracing is the pious grail of plates. It simulates how light behaves in the real world to produce the most pragmatic and immersive plates for gamers and generators and runs presto thanks to 2nd gen RT bones.
OPTIMIZED authority AND interpretation
NVIDIA Max- Q is a suite of technologies powered by AI that optimize laptops to deliver high interpretation in slim shape procurators.
LIGHTNING- whirlwind AND SMOOTH exposition
The 144Hz IPS- position exposition brings you striking illustrations and a smooth refresh rate so you noway miss a thing.
* Optional. The factual specification may vary by configuration.
REVOLUTIONARY Chilling FOR NEXT- word GAMING
Devoted thermal results for both the CPU and GPU with over 6 heat pipes. By enlarging the internal periphery of the thermal tube and exercising MSI- exclusive thermal grease to insure ultimate interpretation under extreme gaming.
THE expressway MUSIC SHOULD BE
enthrall yourself in lossless music and enjoy the decoration sound quality with Hi- Resolution Audio.
Elate YOUR AUDIO
Experience audio of the expressway it was intended and partake it with Nahimic in-game 3D compass & Sound participating via Bluetooth.
GET ALL THE suckers
The exclusive MSI Center helps you control and customize your MSI laptop to the expressway you want.
PLAY Movable GAMES AS A press WITH A regulator
Console Mode provides a press- suchlike experience to laptops with an intuitive project for mainstream game wireless regulators.