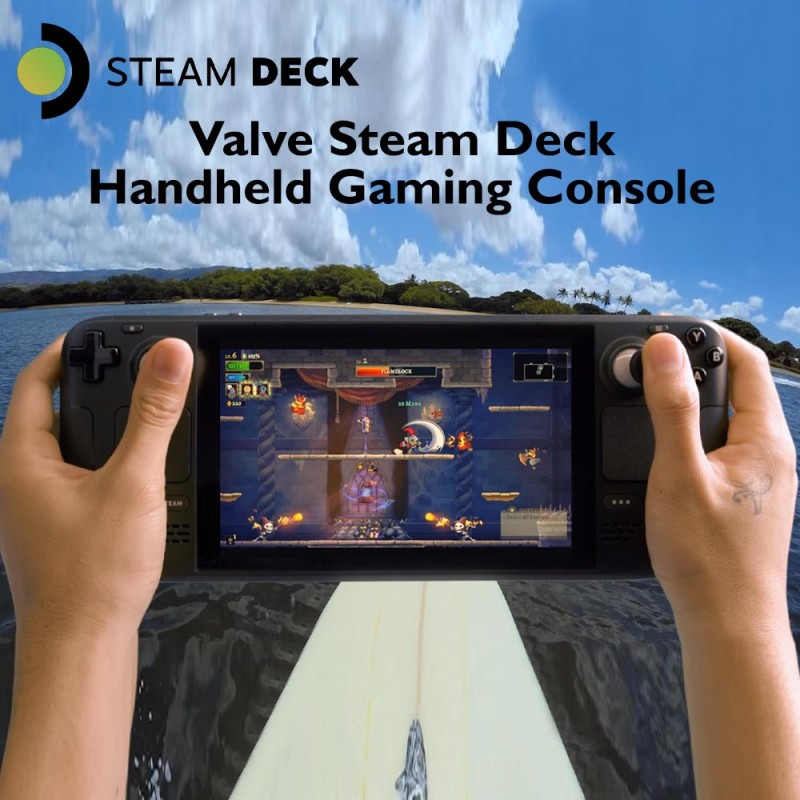 Valve is entering the gaming press business with the new Steam Deck, a press geared toward PC gamers. The Valve Steam Deck 64 GB will bring a PC gamers ’ Steam archive to the handheld press, which Valve says will give a flawless transition between both platforms. As the name suggests, the Steam Deck 64 GB will carry a 64 GB eMMC internal storehouse and will carry a carrying case. A micro SD niche will also enable an expanded storehouse. The Steam Deck can also be docked to an examiner, and exercised as a PC, or docked to a television. stopcock partnered with AMD to produce a technical APU optimized for handheld gaming, and Valve says the chip will deliver interpretation to run AAA gaming titles. The Steam Deck 64 GB is accoutred with a 7- point touchscreen, and two trackpads under the control sticks that have gamers to operate games noway aimed outside of jellyfish and keyboard capabilities.
Portability meets authority
We partnered with AMD to produce Steam Deck's ritual APU, optimized for handheld gaming. It's a Zen 2 RDNA 2 hustler, delivering further than enough interpretation to run the rearmost AAA games in a veritably effective authority envelope.
Your Steam Library, anywhere
Once you've reported into Steam Deck, your exclusive Steam Library shows up, precisely like any other PC. You will also know the comity standing of each game, indicating the sort of experience you can anticipate when rollicking. You can stoutly filter any prospect in your archive by comity standing if you are appearing for special feathers of guests.
Control with comfort
The Steam Deck was erected for extended play sessions — whether you are utilizing thumbsticks or trackpads with full-size controls deposited impeccably within your reach. The reverse of the device is carved to comfortably fit a wide range of phase sizes.
Hi-Fi audio
Brume sundeck's stereo chairpersons pack a punch. A bedded DSP provides clarity and a wide soundstage for an immersive listening experience. Connect your favorite headset, or exercise the onboard binary microphones to converse with your musketeers.
40Wh battery
Brume sundeck's onboard 40- watt- hour battery provides several hours of playtime for the utmost games. For lighter use cases like game streaming, lower 2D games, or trap browsing, you can anticipate getting an ultimate battery life of roughly 7- 8 hours.
Expandable I/ O
The single USB- C jack is multi-purpose exercised for charging, peripherals, or indeed throwing the game onto a monumental movie at the same time. Any USB- C mecca can be exercised to expand your options, or get our Steam Deck ™ Docking Station when it's released. further word on the wharf is below.
Wireless
WiFi keeps you connected to the world, and Bluetooth allows for a wide variety of wireless peripherals- from regulators to headsets, keyboards, and mensches.
Stop/ Resume
We’ve erected a quick suspend/ capsule point into SteamOS. Press the authority actuator, and Steam Deck will suspend your game and go into sleep mode. shove the authority actuator again and it'll arouse up right where you left off.

Nintendo
Ni no Kuni Wrath of the White Witch For Nintendo S
169.23 SAR